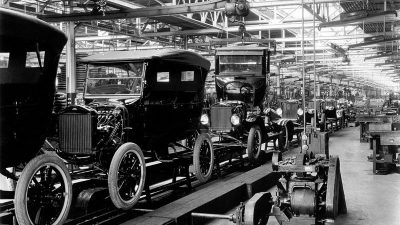 Back in 1913, Henry Ford began work on the creation and establishment of the continuous assembly line of «T» model cars in the production departments of his company. This was the beginning of the industrial revolution. Conveyor line in the factory of Ford in Highland Park, Michigan (USA) was the starting point of the development of mass production in the world.

Henry Ford long ago thought about the way to make a mass automobile at low cost, because at that time very few people could afford to buy a car.

At the beginning the company of Ford produced cars only on request. This approach to automobile production, when assembly was carried out manually, significantly increased the time and labour costs, as a result the cost of a car was significant too. 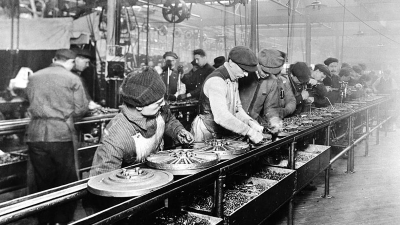 To achieve his goal Henry Ford simply needed to increase the productivity of the plant. At one of the factories in Detroit it was decided to make the implementation of the new scheme. The chassis of cars were connected with a strong rope, and workers involved in phased making up the car stood along the line. That’s how the creation of the first conveyor started.

Using his own experience and the experience of predecessors from other manufactures Ford perfected stages and methods used in the manufacture of conveyor, bringing thus the appearance of a new mass production day by day. The next step was to reduce costs for highly paid professionals, this has been achieved, all the details were standardized, now they were gathered by unqualified workers. 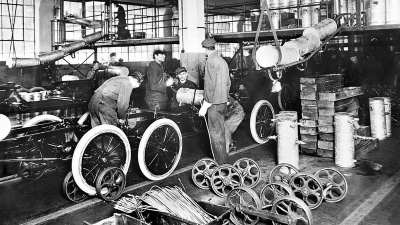 The production process was divided into several stages which reduced the production fourfold. At the beginning each of the production departments was a separate assembly line, but after some time Ford approved fateful decision to connect all the lines in one continuous line.

The last step was the creation of a single conveyor which passed through many production departments of the company, where the assembly of the car was carried out gradually. As a result the assembled automobile was driving out from the factory conveyor on its own motion. Apart from the main conveyor the additional moving lines were used to ensure timely supply of the components needed in assembling department.

The accuracy and speed of action became the keystone to success of mass production in the world. Manufacturing of «T» model reached record levels – a ready car was coming down from the conveyor every 10 seconds. The first conveyor created by Ford is undoubtedly a revolutionary event in the history of mass production.

Of course for more than a hundred years since the creation of the conveyor system enormous changes took place in the process of automation and choosing the executive firm to create such a system. And we should remember the experience and approach to the implementation of the task. We are always happy to assist you in improving production processes in your enterprise because for more than a decade of production of conveyor systems we have implemented a variety of projects from the most demanding customers.